Born on Third traveled to Kane County today to take in the Peoria Chiefs game against the Cougars, here’s a recap, mostly pictures, from the day.

We actually bought the tickets before Javier Baez was assigned to Peoria, so it was a bonus that he was playing for the Chiefs and we couldn’t wait to see the 2011 first round draft pick of the Cubs.  Unfortunately, the Peoria Chiefs politely warned us of something on the way to the game..

Yes, that was the Peoria Chiefs twitter account letting us know that Javy Baez was not in the lineup today, oh well I guess, at least we still get to see the Chiefs and Kyler Burke pitch.  We got to the park around 11:30 because we were expecting the gates to open at 12 which is what the website said but they had the gates open already.

NOTE:  Click the picture for the full size, it’s worth it! (Please feel free to use my pictures, but please ask, I would like some credit, thanks!)

Massive picture recap after the jump!

So we made our way in and got to our seats.  It became clear that if we wanted to be an autograph hound we could have snagged Baez’s auto on a ball or anything we wanted really, but that’s not what we were there for, we just wanted to take in a ball game.

Some of the players hanging out before infield practice, Baez is #25

Some of the autograph hounds that I mentioned 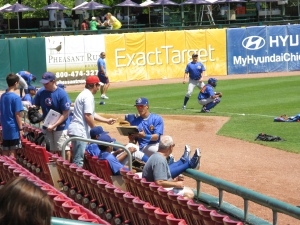 Zeke DeVoss leads off the game 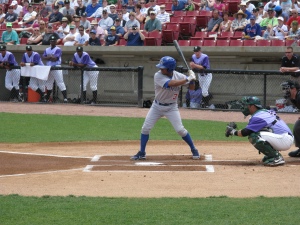 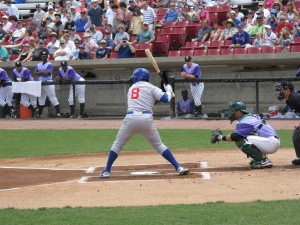 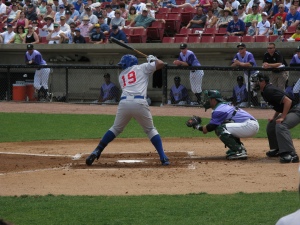 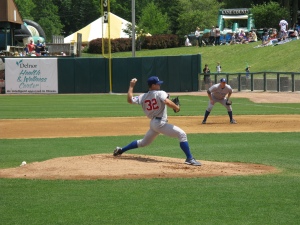 Burke was helped out by two nice defensive plays as the Chiefs gunned down two Cougars at the plate.

Just before the collision, sorry. 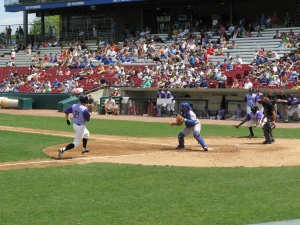 Scary moment for sure here, Anthony Giansanti made a great play at third by staying in front of a hot-shot, he got the out at first but he was clearly hurt.  Giansanti went to a knee, then ended up flat on his back, and at one point one of the first aid guys had to cut Giansanti’s undershirt.  It was tough to watch, but Giansanti walked off the field under his own power, on the plus side, that meant Javier Baez was now in the game.  Hopefully Giansanti is doing alright. 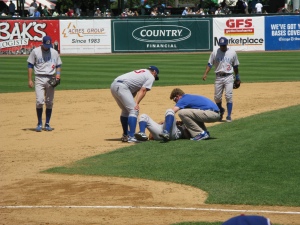 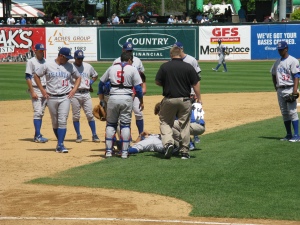 Once Baez got into the game he didn’t disappoint, wow, the kid is really good, and he knows it.  In his first at bat he took the first pitch he saw and hit a 2-run homer that went at least 420 feet to center field.  I was lucky enough to capture the flawless swing.

Not only was Baez impressive with the bat, he made three or four slick pays with the glove.  Two back to back plays which were web gem material for sure.  Unfortunately the Chiefs couldn’t do anything the rest of the day and ended up losing 6-5 in 10 innings.  It didn’t matter though as we had a great time, and got to see Baez show why he is a legit Cubs prospect.  Really hope you enjoy this recap.

I will post a gallery of all the pictures shortly, thanks for reading!