It took all year, but the Cubs finally managed to register a victory on the road against a National League West opponent, yikes.  For five innings today it was much of the same for the Cubs as they trailed 2-1 and couldn’t get anything going offensively. 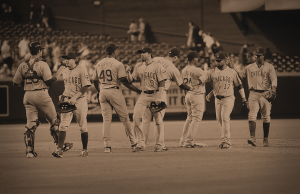 That changed in the sixth as the Cubs found some clutch hits, but received a whole lot of help from the D-backs as they committed three errors in the game.  The Cubs scored four times in the sixth to take a 5-2 lead and never looked back, taking this one 7-2 to win their final road game of the season.  Chris Rusin made his final start of 2012 and it was a solid one.  Rusin went five strong innings giving up two runs, only one earned, on three hits while walking two and striking out four to earn his second career victory.  The Cubs bullpen was lights out over the final four innings to preserve the victory.  Anthony Rizzo, who hasn’t that great of a road trip had a solid day at the plate going 3-for-5 with two doubles, an RBI, and a run scored.  Starlin Castro joined the fun as well going 2-for-4 at the plate as he continues his strong finish to the season.  The Cubs return home to finally put the 2012 season out of its misery and need a sweep of the Astros to avoid the dreaded 100 loss mark.