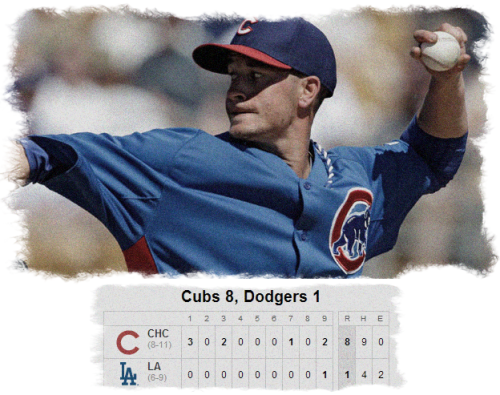 Chris Rusin was outstanding Thursday afternoon, which is nothing new this Spring as he has been nothing short of brilliant.  The lefty is slated to start the 2013 season in the Iowa rotation, and if he has continued success like this don’t be surprised if he is back at Wrigley sooner than later, either starting or coming out of the pen.

Brent Lillibridge made a triumphant return to the lineup going 2-for-3 with a double and two runs scored.  Welington Castillo got the start behind the plate and was 1-for-2 with a triple, two RBI’s and a run scored.  Luis Valbuena (1), Brian Bogusevic (2), Dave Sappelt (1), and Darnell McDonald (1) had the rest of the runs knocked in.

As I mentioned, Chris Rusin was awesome.  Rusin tossed five nearly perfect innings, giving up no runs on one hit while walking one, and striking out one.  Raley improved to 2-0 on the Spring with a 0.69 ERA, he has worked thirteen innings this spring and has given up one run.  Drew Carpenter, Jaye Chapman, and Blake Parker all had scoreless appearances in the victory.