Scott Feldman is pitching every bit like a man trying to prove himself to the rest of the league, and the Cubs are reaping the benefits.  Feldman, who was signed to a one year deal in the off-season has been nothing short of brilliant, especially in his last five starts sporting a 4-0 record with a 1.28 ERA.  Feldman got plenty of help from his offense in this one after it looked like it could be a day of missed opportunities again.  After squandering a few chances early the Cubs broke through in the fourth inning as they scored four times, highlighted by a two-out, two-run double by Feldman, he does it all!  The Cubs added one in the fifth on an Anthony Rizzo solo shot, and three in

the eighth to put this one well out of reach.  The Mets spoiled the shut out bid in the ninth inning, the Cubs still don’t have a shut out this year, but more importantly they got another victory, an 8-2 rout.  Tomorrow brings an opportunity for the Cubs to win their third straight series, something that hasn’t been seen around these parts in a while.

At The Plate – An efficient, productive day at the plate for the Cubs as they pounded out eleven hits while scoring eight times.  David DeJesus got things started at the top of the order going 1-for-4 with a walk, and two RBI’s, he’s now hitting .288 on the season.  Anthony Rizzo had been locked in for a while now, he hasn’t struck out in thirty-four at bats and was 2-for-4 with his tenth home run of the season, an RBI, and a two runs scored.  Nate Schierholtz had a solid day going 2-for-4 with his fifth home run of the season, an RBI, and two runs scored.  The Cubs had three doubles in this one, giving them 97 for the season which is best in baseball.

On The Mound – Scott Feldman was outstanding again, he worked 6.2 scoreless innings giving up seven hits while walking one and striking out six.  The win improved Feldman’s record to 4-3 on the season, coupled with a 2.19 ERA and wow, couldn’t ask for better.  James Russell was solid out of the pen as usual, he worked 1.1 scoreless innings to lower his ERA to 0.54 on the season.  Hector Rondon struggled a bit, he worked one inning giving up two runs on two hits, including a two run homer.

Up Next – The rubber game of the series as the Cubs go for their third straight series win.  The Cubs send Travis Wood to the mound, he’s been just as good as Feldman if not better.  The Mets will counter with Dillon Gee, first pitch scheduled for 1:20 PM CST on WGN. 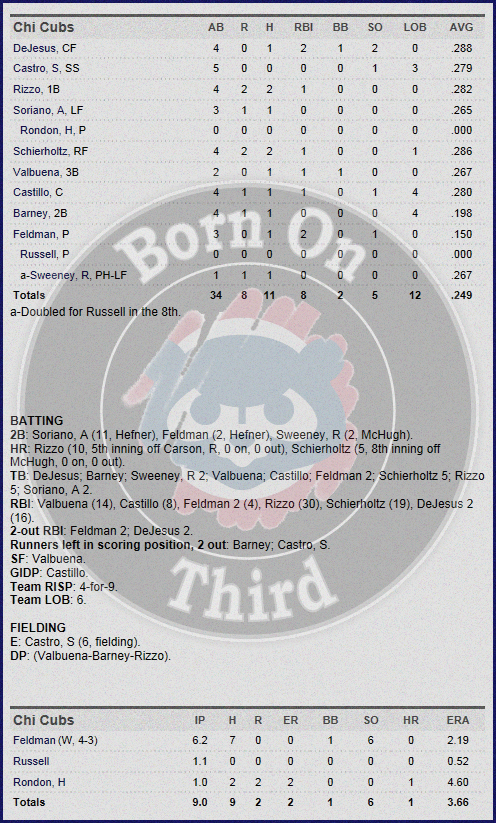