The Cubs trimmed another number off their camp roster today by outrighting Andy Sonnanstine to Triple-A Iowa.  Sonnanstine, who was signed by the Cubs on December 26 has been particularly bad this spring.  The 29-year-old right hander gave up eight runs on 13 hits and three walks over five innings while striking out three.  Sonnanstine was expected to compete for a bullpen spot this spring, he could still help the Cubs out down the road later this season, but that remains to be seen.  The move takes Sonnanstine off of the Cubs 40-man roster which now stands at 39 players.  The Cubs camp roster is down to 47 players, 21 pitchers, five catchers, and 12 infielders.

Thanks for reading,
– George Cotugno

Another day, another fantastic start from a Cubs pitcher.  Chris Volstad was stellar again for the Cubs, going 3 innings allowing just two hits, and striking out one.  Volstad has now gone 6 innings this Spring and has yet to yield any runs.  The Cubs also got solid performances from Jay Jackson, Scott Maine, and Alberto Cabrera.  Andy Sonnanstine was roughed up a bit but the Cubs managed to hang on with Cabrera earning the save. 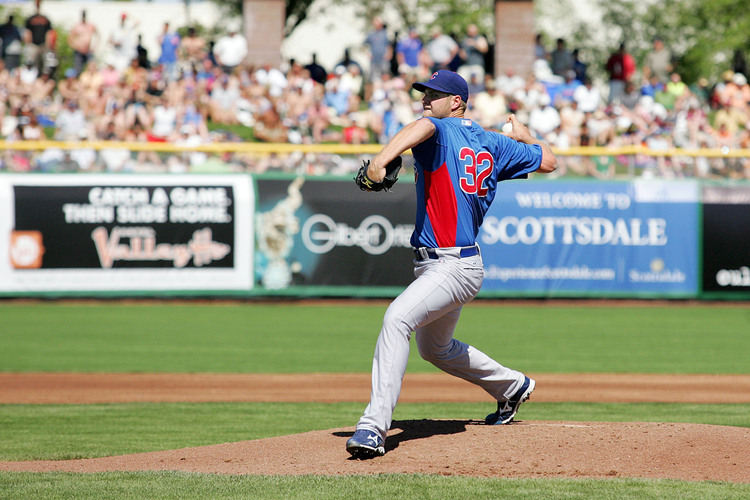 END_OF_DOCUMENT_TOKEN_TO_BE_REPLACED

Throughout the season we will have features that we run each day of the week, one of them will be Media Monday.  We hope to bring you all the best pictures, audio, and video (where allowed by MLB) from the past week.  Obviously everyone is very excited about Spring training getting underway, please enjoy the content below.