It’s only May 6th, feeling okay?  This series has been a roller coaster of emotions, and tonight we can all breathe a little easier as the Cubs just barely hung on to beat the Cardinals 6-5.  Both teams scored in alternating innings until the eighth when they both pushed across a run.  Jon Lester didn’t do himself any favors as he made an error which led to an unearned run, which was not the only unearned run of the night.  The Cardinals got two more after a two out error by Addison Russell, but Lester battled all night.  The newest ace of the Cubs was able to work through seven strong innings before watching the bullpen shut the door, I wouldn’t say they slammed it, they shut it quietly.  Nice to be out from under that losing streak, and the Cubs can now go for the split tomorrow afternoon.

The Cubs have all of a sudden found some clutch hitting, and that is leading to some exciting baseball, and wins on the Northside.  One night after scoring four times with two outs, the Cubs pushed six across after two outs for good measure.  Going back to Sunday the Cubs have had thirteen two out RBI’s, THIRTEEN.  So it really is not a surprise that the Cubs have won four straight games, clutch is good, clutch is productive.  Travis Wood didn’t need much help in this one as he picked up his second win of the season, he was stellar over seven innings.  The Cubs will go for the sweep tomorrow night against Pittsburgh’s ace, Gerrit Cole.

Fun fact, the Cubs had five stolen bases on the night, they now have twenty-five on the year, that leads all of baseball.

Another night, and another close game, what else is new.  Jon Lester turned in his best start of 2015, his only issue was Billy Hamilton who reached base twice, stole three bases, and scored twice.  Other than that, Lester was brilliant as he struck out ten in his six innings of work.  The Cubs were paced offensively by an Anthony Rizzo two run dinger, and a huge game tying solo shot by Chris Coghlan in the seventh.  After watching Jason Motte get out of bases loaded trouble in the bottom of the tenth, Jonathan Herrera came up with a big hit in the eleventh.  Herrera lined a base hit to right which scored Rizzo, got Bryant to third, and Herrera took second on the throw.  Both of those guys scored on a bases loaded David Ross double which put this one out of reach.

Addison Russell with a web gem.

The Cubs head to Cincinnati to continue their seven game road trip, and they have a sour taste in their mouth.  Although a four game series split in Pittsburgh is all you can ask for, the Cubs feel that they should have won the series.  While they should have closed that one out yesterday, they probably should have lost game two, so I’ll call it even.  The Cubs bullpen is reeling however, and they will need some deep starts from their best pitchers in this series.  The Reds come into this series feeling pretty good about themselves as they took three out of four against a crapshow of a Milwaukee team, and sit just a half game behind the Cubs for second place in the Central.

A popular narrative the last couple of years has the been the Cubs ability, or inability to take walks, or make contact.  It was absolutely true, the Cubs were a team that would belt a dinger, but no one would be on base.  When someone was on base, the Cubs just couldn’t make contact, it wasn’t hard to see why they were 26th in the Majors in runs scored last year.  For the past few years the organization preached a “Cubs Way” that would see the team grind out at bats, make more contact, and be a general pain in the you know what for opposing pitchers.  While it’s early, we are starting to see glimpses of what an offense built around the “Cubs Way” will look like.

The Cubs organization was definitely targeting guys this off-season that could help push the club in this new direction.  What impresses me are the guys that were here last year have been so much better in their approach this year.  Arismendy Alcantara is only hitting .091 on the season, but he has an OBP of .259, he’s walked five times already this year.  We haven’t seen OBP numbers like this in what seems like forever, Chris Coghlan (.385), Jorge Soler (.382), Anthony Rizzo (.429), even Starlin Castro has contributed in this way (.364).  These are the kind of numbers that turn solo home runs into two run shots to tie the game in the eighth, kind of like Soler on Monday Night.  The importance of getting on base really can’t be understated, it really doesn’t matter how, just do it.

Let’s look at a comparison between 2014 and 2015, I know it’s a super small sample size, but the improvement in the numbers is striking.

Let’s extrapolate that out for a full 2015 season, the Cubs are on pace to walk 607 times, and strikeout 1,316 times.  That would mean that the Cubs would have 165 more guys on base via the walk over the course of the season compared to last year.  In regards to the strikeouts, the Cubs are on pace to strikeout 161 fewer times, that means those K’s turn into walks, or balls in play that the other team has to account for.  You couple this kind of turnaround at the plate with a lineup that has some additional power in it (Kris Bryant), and the Cubs aren’t going to be 26th in the Majors in scoring for very long, and that should mean more victories on the Northside.

You would think a five run lead with Jake Arrieta on the mound would be safe, it almost wasn’t.  The Dodgers knocked around Arrieta in the second inning as they scored four times to cut a five run deficit to one.  To Arrieta’s credit he battled and was able to work four innings, giving up said four runs on seven hits while walking two, and striking out five.  The bullpen did the job today as C.J. Edwards, Pedro Strop, Hector Rondon, and Joe Ortiz combined to work five scoreless innings, giving up five hits while walking one, and striking out four.

A lot of good swings from the Cubs today as they pounded out thirteen hits while scoring seven times.  Chris Coghlan made some loud noises with his bat, he finished the day 1-for-3 with a two-run blast, three RBI, and a run scored.  Jorge Soler, and Albert Almora both continued their strong springs this afternoon with two hits each.  Almora finished the day 2-for-3 with two doubles, two RBI, and two runs scored, he’s now hitting .353 on the spring.  After starting the spring 1-8-1, the Cubs have now won six of seven, and are playing all around better baseball. 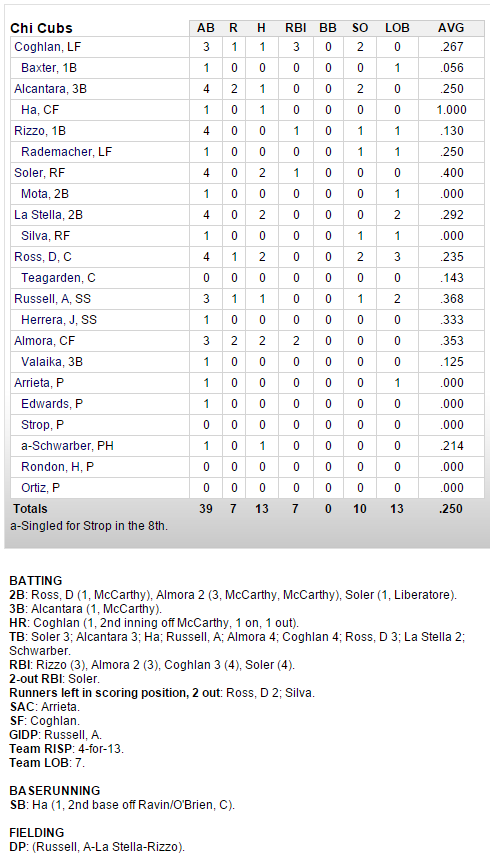 The young Cubs provided the fireworks early against the Giants before the bullpen couldn’t find away to get outs, and blew a 5-0 lead en route to an 8-6 loss.  It was a lineup that had Cubs fans buzzing, Jorge Soler, Kris Bryant, Addison Russell, and Kyle Schwarber, oh my.  It was Schwarber who did the heavy lifting as he jacked a grand slam in his first at bat, giving the Cubs an early 4-0 lead.  The Cubs pitching made that hold up early on as Jacob Turner, and Pierce Johnson were on top of their game, Johnson was particularly impressive.

A tie.  The Cubs and A’s tied today.  Mike Olt got the offense off and running early as he blasted a two-out, two-run bomb.  Unfortunately that was all the Cubs could muster as they went scoreless the rest of the way while scratching out only five hits.  The pitching was outstanding as Travis Wood, Neil Ramirez, and Drake Britton, among others, shut down the Athletics offense.