It doesn’t get weirder than that one, neither team could generate any offense, but somehow the Brewers managed to score five runs on three hits.  The Cubs weren’t any better as they were only able to manage four hits on

the night on their way to a 5-2 defeat.  Chris Rusin made his major league debut and was very good, unfortunately he didn’t get any help from his offense and ended up taking the loss.  Rusin went five innings giving up one run on one hit while walking two, hitting two guys, and striking out four.  The Brewers “big” inning against Rusin was the fourth, they pushed across a run on one hit thanks to two hit batters and a walk.  Rusin got Lucroy to ground into a double play with the bases loaded and one out to avoid any further damage.  The Brewers broke it open in the 6th when Alberto Cabrera walked three guys then gave up one hit, all three guys scored, and it was all but over after that.  The Cubs were able to score twice in the ninth inning but it was too little too late.  Alfsonso Soriano had a solid day at the plate going  2-for-4 with a double and an RBI, he is now hitting .263 on the season with 76 RBI’s.  The Cubs look to avoid the sweep this afternoon in Milwaukee as Travis Wood takes the mound against Yovanni Gallardo.

I only ask for one thing tonight, no base running errors, please, and thank you.  The Cubs will try to even the series up tonight behind Chris Rusin who is making his major league debut.  The game will be at 7:10 PM CST on Comcast Sportsnet Plus (285 HD on Comcast) for a channel finder go here.  Here is how the Cubs will line up.

With Chris Rusin being called up to make his major league debut, and Alex Hinshaw (claimed off waivers from the Padres) being added to the bullpen the Cubs needed to make a couple of moves.  It looks like Jeff Beliveau and Adrian Cardenas will be sent back down to Iowa to make room.  I really liked what Beliveau was able to do, he should only get better, and Cardenas belongs in Iowa if he isn’t going to play every day or at least a couple of times a week with the Cubs.

Thanks for reading!
– George

There are very few things to get excited about when the team you obsess over is bad.  One of the few things to get excited about are prospects making their Major League debut late in the season, and that is exactly what will happen tomorrow night in Milwaukee.  The Cubs have announced that 25-year-old southpaw Chris Rusin will pitch tomorrow night.  Rusin was drafted by the Cubs in the 2009 amateur draft in the fourth round, and he has made steady progress in the system since then.  Here is a pretty stellar scouting report from John Arguello at Cubs Den…

“I’ve watched Rusin often in the minor leagues and most recently in the Dominican League and, if you like the art of pitching, he is a pleasure to watch. He works in the 88-90 mph range with his fastball and, according to Baseball America, has the best change-up and command in the system.  Those two factors make his otherwise average stuff play up quite a bit.  Rusin attacks the lower part of the strike zone, often jumping ahead of hitters early in the count.  He keeps hitters off balance by constantly changing speeds and locations so that when he does “fire” a 90 mph fastball, it probably looks more like 95 mph.  Despite a fringe average fastball, hitters often fail to get a good swing on it.

Rusin also has had excellent groundball to flyball ratios.  This winter his G/F ratio is 3.45 and it was 3.61 at Iowa this past season.  The solid strikeout and ground ball numbers bode well for a pitcher in Wrigley Field, especially when the wind is blowing out, as it often does in the summer.

He’s not a top end starter but he can certainly give you some solid innings at the back of the rotation, perhaps as soon as April of next season.  He isn’t going to beat himself out there.  His FIP numbers throughout his minor league career seem to indicate that if you put a good defense around him, he’ll keep you in the game consistently.”

Here’s a look at Rusin’s numbers this year with Iowa.

It’s a battle for fourth place!  Sorry, I was just trying to liven things up a little bit.  The Brewers have had the Cubs number this year as they have won seven out of the first ten games between the two clubs.  The Cubs pitching staff has taken it on the chin during the season series as the Brewers are averaging 4.6 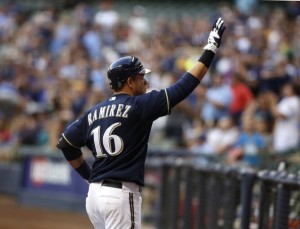 runs per game over the first ten games.  Funny thing is the Cubs are actually averaging 4.8 runs per game this year against the Brewers, the numbers get a little out of whack when you win 8-0 and 10-0, which is what the Cubs have done against the Brewers, all or nothing I guess.  Coming into this series both teams are struggling, only going 3-7 in their last ten games.  Not sure that matters much when you take into account the home and road record of the two teams.  The Brewers have been really good at home going 35-28, conversely the Cubs have been dreadful on the road to the tune of 17-45, yikes.  The Cubs are going to have to score with the Brewers if they want any chance to take this series as the Brewers are 5th in the National League in runs scored. 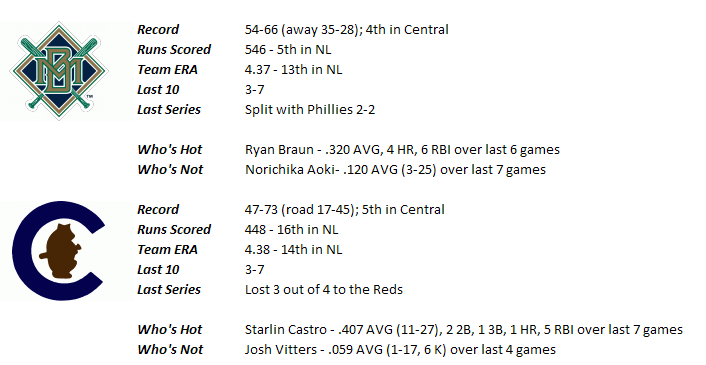 If this info is not enough, please go here to use the CSN channel finder to find CSN+ near you!

Here are the pitching matchups for the three game series.