The first twenty-five games of the Cubs season featured a fun fact, every game has been decided by four runs or less, that streak came to a crashing halt tonight in game twenty-six.  Edwin Jackson was hit hard and often in the early going as the Padres built an 8-0 lead in the fifth inning.  As the Cubs have done all year they fought right back and scored four times in the bottom half of the fifth to make it a game.  Unfortunately the rest of the

Cubs staff couldn’t miss any bats either as the Padres scored in the next three innings, five runs in total, to take a 13-5 lead in the eighth inning.  The Cubs staged a minor rally in the ninth inning to make the score look somewhat presentable but they really never had a chance in this one, and that can be attributed to Edwin Jackson’s continued struggles.

At The Plate – Nice to see the Cubs really pound the ball in this one, too bad it wasn’t enough to keep pace with the Padres.  The Cubs scored seven times on eleven hits, and were uncharacteristically good with runners in scoring position (3-for-9).  Starlin Castro had a big game going 2-for-5 with a home run, two RBI’s and two runs scored.  Anthony Rizzo is locked in at the plate, and now the results are starting to come, he was 3-for-4 tonight with two doubles, a walk, an RBI, and a stolen base.  Luis Valbuena, David DeJesus, and Cody Ransom all hit home runs in this one, Valbuena’s home run was a two-run shot, while DeJesus and Ransom each had solo homers.

Up Next – Game three of the series, and the Cubs will face a familiar face in Andrew Cashner.  The Cubs will counter with Scott Feldman at 7:05 PM CST.  Editors note:  Congrats Blackhawks on winning game one!  Go Chicago sports. 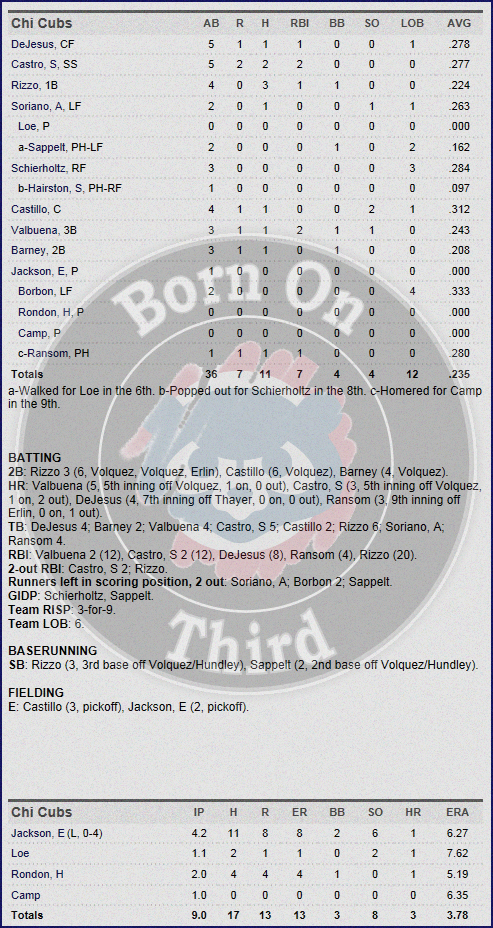