Carlos Villanueva can’t buy a win as he has left with a lead in five of his seven starts this year, the Cubs pen has blown the lead now in four of those five starts.  Villanueva didn’t have his best stuff today but still got into the seventh inning with a 4-3 lead.  The usually reliable James Russell took over in the seventh and gave up back-to-back hits which resulted in the Cardinals knotting the game up.  Michael Bowden worked the eighth inning and surrendered the game winning run as the Cubs couldn’t generate anything in the final two innings.  The bullpen was half the story, double plays and missed opportunities were the other half.  The Cubs seemingly had men on base all day long, but grounded into four double plays to thwart any rally they might have had.  The Cardinals weren’t much better, but did get the big hit in the eighth inning when they needed it, but they also grounded in to four double 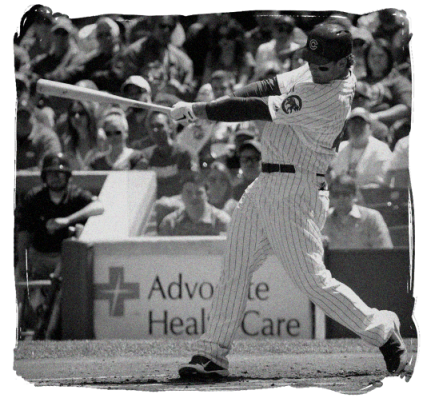 plays, odd game in that regard for sure.  Really wanted a sweep for the Cubs, and of course they were in position to get one, eventually these blown leads have to stop…..I think.

At The Plate – The Cubs pounded out eleven hits, but could only manage four runs as they were 1-for-9 with runners in scoring position, and they had that double play issue that I already mentioned.  Luis Valbuena got a chance in the three spot today and delivered a solid game going 1-for-2 with two walks, and two runs scored.  Anthony Rizzo continues to roll, he was 3-for-4 with a double, and a run scored, all of a sudden he is hitting .269 on the season.  Cody Ransom continues to hit for the Cubs, he was 2-for-4 with two singles in the loss.

On The Mound – Carlos Villanueva wasn’t at his best, but did more than enough to pick up a win in this one, alas, a no decision for the funny facial hair guy.  Villanueva went 6.2 innings giving up three runs on seven hits while walking three and striking out two.  James Russell wasn’t his usual self in this one, he was asked to get the last out in the seventh, he did, but not after giving up a run on two hits.  Michael Bowden worked the eighth and took the loss, he gave up one run on two hits.  Kevin Gregg, the Cubs new closer (officially), worked a scoreless ninth to keep the Cubs in it, he walked one and struck out two.

Up Next – A day off tomorrow.  Then a three game weekend series in Washington, the full series preview will be up tomorrow, going to be a tough series for sure.