Marmol coaster!  It’s too early in the year for this kind of drama.  The Cubs once again couldn’t find much offense, but managed just enough to get the win with Nate 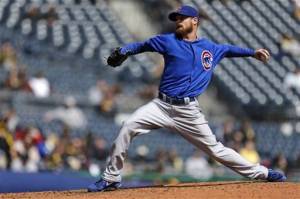 Scheirhioltz providing the big blow, a two-run homer in the ninth inning which the Cubs ended up needing.  Travis Wood was outstanding in his first start of 2013 but had to sit on the edge of his seat with the rest of us as Carlos Marmol came within a small unit of measurement of blowing it.  After allowing the Pirates to score twice in the ninth, Marmol got Alvarez to strikeout, and Walker to hit into a double play, never a doubt, Cubs win three to two……  Nice series win for the Cubs to start the season.

At The Plate – The Cubs only had two hits last night, today they had three, at least the result was different.  Starling Castro was 1-for-4 with an RBI on the day and has the honor of being the first Cubs player to get a hit with a runner in scoring position this year, yep.  Nate Schierholtz was the offensive hero going 1-for-3 with a walk, a run, and two RBI’s which came on a huge two-run homer in the top of the ninth to give the Cubs a three run cushion.

On The Mound – Travis Wood was outstanding this morning/afternoon, Wood went six scoreless innings, giving up one hit while walking two and striking out four to earn his first win of the season, barely.  Shawn Camp, James Russell, and Kyuji Fujikawa were very good out of the bullpen as they tossed a combined two scoreless innings, giving up no hits, no walks, and struck out three.  Cue the circus music… enter Carlos Marmol.  Marmol wasn’t very good, again, as he gave up two runs on three hits while walking one and striking out one, but battled and ended up “earning” his first save of the season.

Up Next – The Cubs head to Atlanta for a weekend series against the high-powered Braves.  Scott Feldman will make his Cubs debut against Atlanta lefty Mike Minor at 6:30 PM CST.

The Run Down:  The Cubs look to win the first series of the year, but will have  a tough test against James McDonald who really came into his own last season.  It seems clear that the Cubs have to generate offense at the top of the order because the bottom part has not been close to adequate so far.  The Cubs will look to get their first hit with men in scoring position today, of the year.  Obviously that has to improve, but looking at the big picture it really would be nice to start the season with a series win.

It was rather obvious early, the Cubs offense was awfully disinterested in this one.  Wandy Rodriguez and the cold temperatures combined to keep the Cubs at bay as they could only manage two

hits all night.  The Cubs opportunity came in the seventh inning when they put the first two on, and then loaded the bases with one out only to come up empty.  It really was a story of one inning both ways tonight for the Cubs as Edwin Jackson was decent except for the fourth inning.  Jackson struggled with his command in the fourth and gave up two runs in the frame which was more than enough for the Pirates in this one.

At The Plate – How many ways can I say bad?  I guess I’ll just leave it at that, the Cubs approach and the subsequent results or lack there of left a lot to be desired.  Alfonso Soriano and Alberto Gonzalez were the only Cubs to register hits in this one, both singles.

On The Mound – Edwin Jackson was really good early, then got into deep count after deep count and had to exit after five innings of work.  Jackson gave up two runs on three hits while walking one and striking out five in his Cubs debut.  Hector Rondon made his Major League debut, tossing a scoreless inning while walking two, and striking out two.  Michael Bowden gave up one run in his inning of work on two hits.  Shawn Camp and Hasanori Takahashi each had scoreless outings.

Up Next – The rubber game of the series.  Travis Wood will take on James McDonald at 11:35 AM CST, love morning baseball!  Look for the normal Cubs lineup sans Welington Castillo tomorrow.

Stat Of The Night – Here I will feature a stat, either from the game, or a trend, could be good, or bad, or alarming.  Tonight it’s alarming, the Cubs are 0-for-13 as a team with RISP, yikes.

The Cubs had two hits, there are no highlights worth watching, I promise.

The Pirates comes to town looking very much like the 2011 version of the club that collapsed down the stretch and finished with a below five hundred record yet again, and nothing like the surging contender earlier in the year.   The Pirates sit just two games over five hundred now and are

losers of six straight games, three of those against the Cubs in Pittsburgh last week.  The Cubs on the other hand are playing solid baseball, winning five out of their last six games, all on the road which is really saying something given how bad they have been away from Wrigley this year.  Solid starting pitching and the long ball have paced the Cubs in September as they have ten home runs, 5th most in the National League this month.  No one has contributed more to that total than Alfonso Soriano as he has five home runs in just 12 games this month.  After being pulled in the third inning two nights ago, and missing yesterday’s game it sounds like Anthony Rizzo will be back in the Cubs lineup tomorrow, that collision could have been much worse.

Here are the pitching matchups for the four game series.

Talk about an exclamation point on a season, Jeff Samardzija went the distance in his final 2012 start in a 4-3 victory over the Pirates.  It was known for a couple of days that Samardzija would be making his last start of the season tonight, so he was ready to empty the tank tonight, and he did.  Samardzija gave up three runs, two earned, on four hits while walking one and striking out nine in his first career complete game. 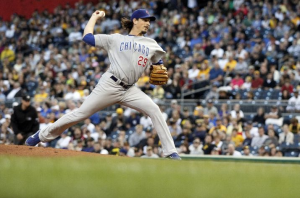 A fantastic season for Shark as he was not guaranteed a spot in the rotation until the last week of spring training, he finished the year 9-13 with a 3.81 ERA, and 174.2 innings.  The Cubs did just enough with the bats to help Samardzija get his ninth win of the season and put another dent in the Pirates playoff hopes.  Four runs was just enough, but the Cubs could have had so much more tonight as they were 1-for-12 with runners in scoring position and left ten guys on base.  Tony Campana, hitting ninth tonight, was 2-for-3 with two runs scored, a walk, and a stolen base, the Cubs had four stolen bases in all.  Alfonso Soriano went deep again tonight, his 27th home run of the season, David DeJesus and Welington Castillo each had two hits in the victory.  Two in a row, the Cubs go for the sweep tomorrow afternoon.

Let’s hope the Cubs have some fire left over from yesterday as they could use some of that on the field this weekend against the Pirates.  The season is becoming historically bad, and facing another contender on the road is not going to make it any better.

The Cubs come into this series losers of six straight with only two wins in their last ten games.  Anthony Rizzo is one guy that has been earning his paycheck of late as he is hitting .423, with a double, three home runs and three RBI’s in his last seven games.  The pitching staff on the other hand should give their money back to the organization.  The Cubs staff has a record of 0-6 with a 7.20 ERA, such is life in September with a bunch of guys basically trying out for next season.  The Pirates have been mediocre as of late as they try to summon the energy for one final push for the postseason, they trail both Atlanta and St. Louis in the race for the Wild Card by 1.5 games.

Prediction:  Cubs Win Series 2-1, how do you like those apples?

It wasn’t too  long ago that the Cubs were contenders and would struggle whenever the lowly teams in the division would come to town, well they are now returning the favor to the Pirates.  Not that it’s something to get really excited about because of course a team would rather be contending, but it’s nice to have meaningful win one way or another.  Paul Maholm turned in another outstanding performance, this time against the only other team he has suited up for in the Major Leagues.  Maholm went eight innings giving up one run on four hits while walking one and striking out seven to earn his ninth win of the season and lower his ERA to 3.88.  It was the second start in a row that a Cubs pitcher was able to go eight innings as Jeff Samardzija did the same to the Pirates yesterday.  Things got started in a big way as Starlin Castro took the first pitch he saw and deposited in the right center field bleachers for his ninth home run of the season to give the Cubs a 1-0 lead.  The only mistake Maholm made all night was an elevated fastball to Garrett Jones, Jones matched Castro’s solo shot with one of his own to tie the game at one in the fourth.  David DeJesus came through with the big hit for the Cubs in the fifth inning, with two outs and the bases loaded DeJesus laced a double into the right field corner scoring two to give the Cubs a 3-1 lead.  Alfonso Soriano put the game to bed in the 6th as he blasted his 19th home run of the season, a two run shot to give the Cubs a 5-1 lead and that’s how it would end.  The Cubs go for the sweep tomorrow morning behind Ryan Dempster, I guess.  Full box score and highlights after the jump.