It’s up to you, the reader, to decide whether or not you want to believe my headline, but I assure you that it is valid, and not a joke.  This one was a struggle to get through, not only were two of the worst teams in baseball playing, but they did so for just under four hours.  It’s hard to play a four hour 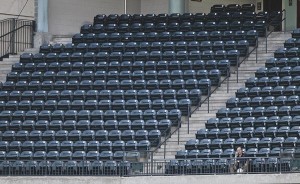 game and only have five total runs scored, but the Cubs and Astros “accomplished” that feat last night.  All’s well that ends well I guess as the Cubs wraped up what felt like the longest game of the year with a 4-1 victory.  Chris Volstad was solid yet again for the Cubs as he tossed five strong innings giving up one run on four hits while walking five and striking out four.  Volstad struggled with his command, see the five walks he surrendered, but he battled and made it through the fifth to not only qualify for, but register his third win of the season.  The Cubs had an unlikely hero at the plate, I only say unlikely because Dave Sappelt doesn’t get a lot of playing time and hasn’t been up with the big club for very long this season.  Cubs fans might want to get used to him because he most likely will have a role on the 2013 team, performances like last nights will go a long way in securing a spot on the roster next year for Sappelt.  Sappy was 2-for-5 with two doubles, three RBI’s and a run scored in the victory, the three RBI’s are a career high. 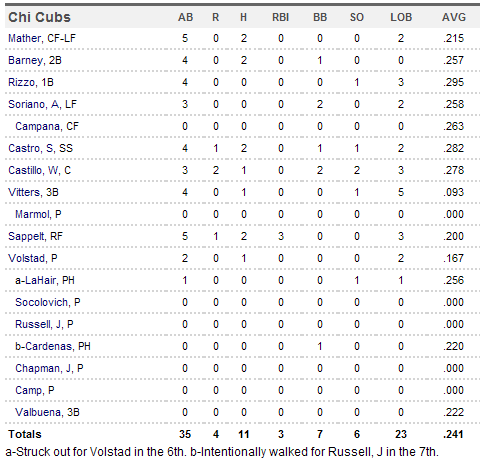 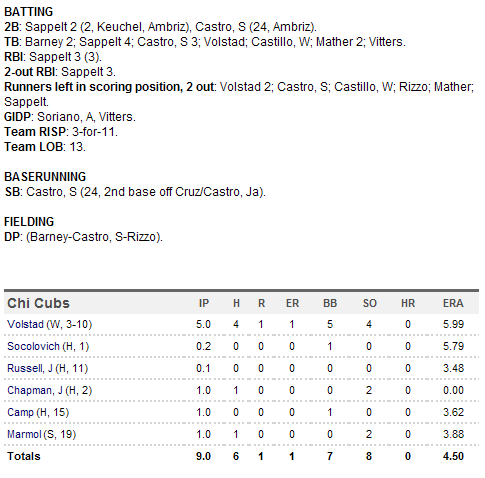 Another day, another loss for the Cubs who got swept in Houston Wednesday night.  However the Cubs did hold the lead for a short period of time in the series finale against the Houston Astros.  The Cubs got the scoring started in the first when Reed Johnson hit a homerun just inside the left field foul pole to give the Cubs a 1-0 lead.  Samardzija and the Cubs would hold the lead until the bottom of the fourth when with two outs and runners on 1st and 3rd JD Martinez blooped a ball into right field.  DeJesus came racing in while Barney went back and just when it looked like DeJesus made the catch, Barney knocked it out of his glove and both runs scored on a triple by Martinez.

As you guessed the Cubs offense couldn’t get anything else going and when they did they once again couldn’t come up with a big hit.  The Astros added three runs in the eighth off of Rafael Dolis, who was brought in to get some work in.  He was not sharp in 2/3 innings, but it is hard to stay sharp as a closer when your team loses nine games in a row.  Brett Myers came in and the Cubs went down quietly in the ninth losing 5-1.  The good news is the Cubs will not lose their 10th straight tomorrow as they have a day off, before starting a three game series in Pittsburgh starting Friday.  Full box score and highlights after the jump.

END_OF_DOCUMENT_TOKEN_TO_BE_REPLACED

Nothing worse than losing to the White Sox, except maybe banging your head against the wall over and over which is exactly what the Cubs are doing.  For the second straight game against the Sox the Cubs faced a pitcher who had roughly a 6 ERA.  For the second straight game they went up to the plate with absolutely no approach, swinging at everything, pitches in the zone, out of the zone, over their head, bouncing pitches.  The fact that this has happened two games in a row is inexcusable on all fronts.  Make an adjustment, both pitchers have struggled, why try to help them out?  Anyway, Ryan Dempster finally had a rough outing as he was having trouble locating, and the Sox actually made him work, novel concept.  To Dempster’s credit, he battled as usual.  He ended up going six innings, he gave up four runs on seven hits while walking three and striking out three.  With the loss Dempster falls to 0-2 as he sees his ERA skyrocket to 2.28.

The Cubs had nothing going all night against the Sox, at least until the 9th inning and two outs, better late than never, right?  Alfonso Soriano had a great game at the plate going 3-for-4 with a double, a home run and two RBI’s.  I’ll be the first to admit, I come down on Soriano a lot, part because of his contract (not his fault) and his inability to play LF the right way (not really his fault).  So I will be the first to say that I have been blown away by his effort this year, he’s clearly hurt, but he goes out there every game, and hustles.  That could not be said of him the last two years, so it’s refreshing to see for sure.  Joe Mather had the other blow for the Cubs as he was 1-for-3 at the plate with a two-run homer in the 9th.  Blake Parker looked great in a 1/3rd of an inning, then he got hurt, what else is new?  This team is being destroyed by injuries, add Parker to the list, hopefully it’s not that bad.  Full box score and highlights after the jump.

END_OF_DOCUMENT_TOKEN_TO_BE_REPLACED

The Cubs are positioned to win their second series in a row after beating the Phillies this afternoon 5-1 behind a dominant Matt Garza.  Garza was nasty, going 7 innings, only allowing 1 hit and 1 walk while striking out 10.  Garza, the victim of some poor run support and tough luck finally got some help to record the victory.  Tony Campana was once again the spark plug for the Cubs offense, this time leading off, as he went 2-for-4 with two runs scored and another stolen base.  Bryan LaHair and Jeff Baker also had productive days at the plate.  LaHair went 3-for-4 with two doubles and two runs scored, while Baker went 2-for-4 with a double and an RBI.  Joe Mather chipped in with a solo home run which is the only home run hit by a Cubs outfielder on the season, yikes.  Full box score, and highlights after the jump.

END_OF_DOCUMENT_TOKEN_TO_BE_REPLACED

On an evening that seemed like the “same old night” at Wrigley, the Cubs had a breakthrough.  After getting dominated for 8 straight innings by Cardinals starter Jaime Garcia, the Cubs took three weeks worth of frustration out on Cardinals closer Jason Motte.  A combination of outstanding at bats, and a clutch base hit led to the Cubs first walk off win of the season.  Full recap and highlights after the jump.

END_OF_DOCUMENT_TOKEN_TO_BE_REPLACED

Another day, another big home run from Alfonso Soriano, hopefully he can bottle this magic and take it North with him next week.  Soriano has been on fire at the plate, hitting six home runs on the spring, he’s clearly motivated, and a motivated Soriano can be a dangerous one for the rest of the National League.

END_OF_DOCUMENT_TOKEN_TO_BE_REPLACED

Joe Mather continues to impress as he hit a game winning solo homerun yesterday against the Texas Rangers.  He is making a strong case to make the opening day roster with a rather impressive spring thus far.  Not only has Mather had a nice spring with the bat, but his versatility should only improve his chances of making the team.  He can play the corner outfield spots and can also play both corner spots in the infield.  Mather, 29 hits from the right side of the plate, which if he makes the team he should get plenty of playing time against left-handed pitching as he could spell DeJesus, LaHair, and Sewart. END_OF_DOCUMENT_TOKEN_TO_BE_REPLACED