The Cubs look to get their offense moving in the right direction tonight against Julio Teheran and the Braves.  Carlos Villanueva makes his Cubs debut against a potent Braves lineup. 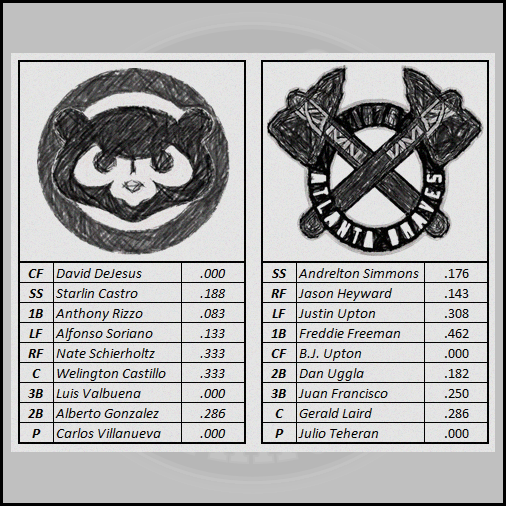 More of the same from the Cubs offense tonight in Atlanta as they could only manage five hits and one run in a 4-1 loss.  Sure Mike Minor was pounding the zone, but Cubs hitters made things way too easy on Braves pitching by 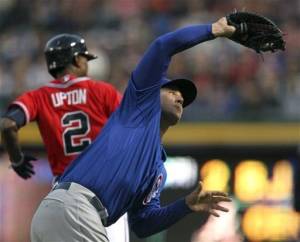 having way too many aggressive at bats.  The Cubs have two losses now, both with the “lefty lineup” on display, meaning DeJesus and Schierholtz on the bench.  Not saying that they would have made a difference, but the Cubs always seem to struggle against lefties.  Scott Feldman was all over the place, but battled, the result was being over 100 pitches and out the game before the end of the fifth inning.  It’s not the end of the World, the Cubs are 2-2 which is probably a fair record at this point, if not better than it should be given the offensive struggles.

At The Plate – Another night, another low number in the hit column for the Cubs.  Alfonso Soriano, Scott Hairston, Welington Castillo, and Alberto Gonzalez were all 1-for-3.  Hairston provided the only offense of the night with a solo home run in the fifth inning off of Minor.

On The Mound – Scott Feldman made his Cubs debut and really never settled into a groove.  For the most part he was able to pitch around trouble but couldn’t get out of the 5th.  Feldman went 4.2 innings giving up four runs on five hits while walking four and striking out one.  The bright spot was the bullpen, Michael Bowden and Hector Rondon shut the door over the last 2.1 innings but it was to no avail.

Up Next – Carlos Villanueva will make his Cubs debut opposite Julio Teheran at 6:00 PM CST.  The Cubs will have their hands full again as Teheran is a high-class talent that will give them fits if they aren’t patient.

Stat Of The Night – The Cubs have 16 hits in the first four games of the season. 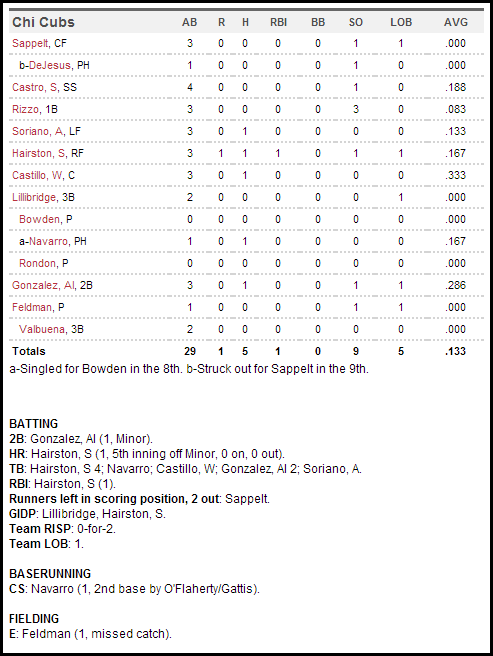 Consider this a stiff test for the Cubs, nothing against the Pirates, but the Braves are a different animal.  The weather should be much nicer than it was in Pittsburgh so hopefully that means that Cubs bats will heat up with the temperatures as they have been cold as ice so far.  That said, the Cubs enter the series with a 2-1 record, the same as the Braves, below you will find all the important information pertaining to the upcoming series, everything you need to know in one convenient place.

Cubs won two out of three against the Pirates in Pittsburgh

Braves won two out of three against the Phillies at home

For the Cubs, the entire offense is frigid, only scoring six runs over the first three games of the season.  They aren’t getting hits either as they have the worst team batting average in all of baseball at .121, they don’t ask how, just how many when it comes to wins….or something like that.  Closest thing resembling a hot hitter would be Nate Schierholtz, Nate had a huge two-run homer yesterday, and is hitting .333 on the season.  The Cubs pitching has been fantastic, well Cubs pitching not including anyone named Carlos Marmol.  The Cubs are 8th in the Majors with a 2.08 team ERA, a big reason why they are 2-1.

The Braves have as many home runs as the Cubs do runs (six).  Freddie Freeman is on a mission in the early going, hitting .500 (5-for-10) with one double, one home run, and six RBI’s.  One of the Braves newcomers isn’t finding things so easy, B.J. Upton has been slow out of the gate going 0-for-11 with seven strikeouts.  The Braves are hovering around the middle of the pack when it comes to team ERA with a respectable 3.00, surprisingly Tim Hudson isn’t helping as his only start was a rough one where he gave up three runs in 4.1 innings of work.

Look for the Cubs bats to get healthier in this series despite having to face two young stars in Minor and Teheran, and one solid veteran in Hudson.  Unfortunately the Braves will continue their hot hitting and take two out of three from the Cubs this weekend.