With the Cubs trailing 1-0 in the seventh, Anthony Rizzo made a heady defensive play.  Matt Harvey popped up a sac bunt attempt, and instead of catching it, Rizzo let it drop and turned two because Harvey wasn’t running.  Huge play.

Another frustrating one run loss for the Cubs, just when you thought they might be starting to win these close games today happens.  It was a stiff test as the Cubs were facing off against all everything Matt Harvey, and he was as good as advertised, well, after the first inning.  After falling behind 1-0 on a David Wright home run in the first the Cubs answered right back with two runs in the bottom half to take a 2-1 lead.  Edwin Jackson pitched right with Harvey for the 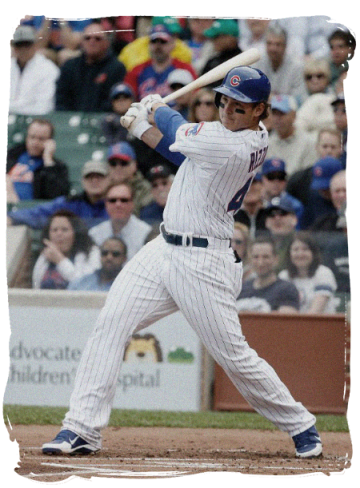 whole game until Harvey got in his way, with the bat.  That’s right, not only did Harvey get the win on the mound, but he got the game winning hit in the seventh inning.  The Cubs still had a chance in this one, but a questionable send by third base coach David Bell took the Cubs out of the eighth inning.  Bell has been fine all year, so I’m not going to pin this on him, but it hurts to have the game tying run cut down at the plate for the second out of the inning when it could have been first and third with one out with Castro and Rizzo coming to the plate.

At The Plate – The Cubs didn’t have much going against Harvey, but did have a very good first inning, and threatened late.  The Cubs could only manage six hits on the day, but were 2-for-3 with runners in scoring position.  Starlin Castro had a solid day going 2-for-4 with a run scored, he’s now hitting .287 on the season.  Anthony Rizzo was 1-for-4 with a double, his twelfth of the season, and a run scored.  Alfonso Soriano, David DeJesus, and Darwin Barney recorded the other hits in the game.

Up Next – Game two of the series at 12:05 PM CST.  The Mets will send Jeremy Hefner to the mound and the Cubs will counter with Scott Feldman 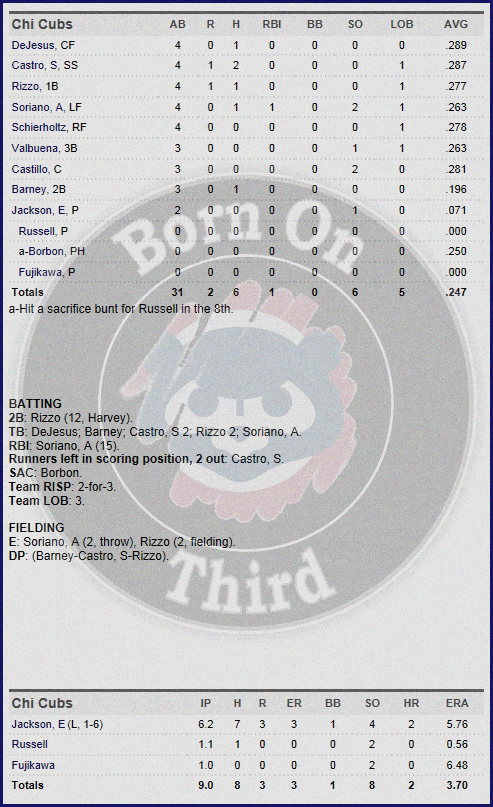 The Cubs welcome the Mets to Wrigley for a three game set starting today at 1:20 PM CST on WGN TV.  Edwin Jackson will look to build on probably his best start the last time out against the Nats, the Mets will counter with young phenom Matt Harvey who has been pretty much unhittable this season.  Here is how both teams will line up, there are scattered thunderstorms in the forecast, hopefully those stay away.

The Cubs are coming into this series playing their best baseball of 2013, and maybe of the last three years.  They have won two series in a row, both against contending teams in the Nationals, on the road, and the Rockies.  The Mets on the other hand are floundering as they are 3-7 in their last ten games and have fallen to 15-23 on the season.  Despite boasting one, if not the best young arm in baseball in Matt Harvey, the Mets pitching is what is doing them in. 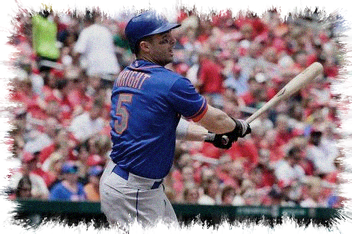 They come into this series with a team ERA of 4.50, which is twenty-sixth best in all of baseball.  The Cubs hold the advantage here as they come into this series with a 3.72 team ERA which is good for twelfth in the Majors.  If you break it down even further you can see that the Mets bullpen has been a real issue in the early going, they have a bullpen ERA of 4.85, which is twenty-eighth in baseball, that won’t help you win a lot of games.  Slowly but surely the Cubs have improved offensively, they still aren’t a juggernaut but they are now twenty-third in baseball with 160 runs scored on the season.  The Mets aren’t much better as they have scored 165 runs which is good for twentieth in baseball.  The key to this series for the Cubs will be to get to the Mets pen as early as possible, not always an easy task but it would go a long way towards winning the series if they could exploit that weakness as they hold the starting pitching edge and should be able to limit the Mets offense.  To recap, get an early lead, Cubs starters shut down the Mets lineup, and exploit the Mets pen, ta-da!

The Cubs took two out of three from the Rockies at Wrigley earlier this week.

The Mets lost three out of four to the Cardinals in St. Louis.

As I mentioned, the Cubs are playing well and I think this series is extremely important as we move forward in 2013.  I know that sounds odd considering we have just reached the quarter pole of the season, but hear me out.  The Cubs have shown flashes of great baseball, followed by huge let downs, it seems they take one step forward and two steps back.

The first goal is to get back to .500 and winning this series goes a long way towards that in my opinion, if they lose this series we will see more of the same as they team hovers around 5-10 games under .500, which isn’t terrible for this group I guess.  But winning this series could put them on a really nice run, I think the Cubs will win this series, take two out of three at least, a sweep isn’t out of the question, but that all depends on what happens today as the Mets have a clear advantage on the mound.  If the Cubs win today, they sweep, if not, they take two out of three.  GO CUBS!