One day after the Cubs rallied in the ninth inning to tie the game and win in extra innings the Cardinals did the same thing.  After trailing for the majority of the game today the Cubs broke through in the 6th inning, scoring three times to take a 4-3 lead.  The Cubs pen held strong into the ninth, that’s when Carlos Marmol blew his first save in his last 20 chances by giving up a one out solo homer to Carlos Beltran to tie the game at four. 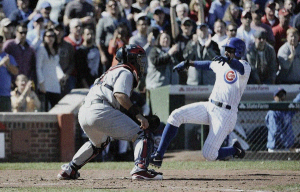 Jaye Chapman took over in the 10th for the Cubs and after retiring the first two hitters he walked the next two guys which is all the Cardinals needed to take advantage.  Jon Jay, who was 0-for-the series ripped a two out double down the right field line to put the Cardinals up for good.  For the second straight day a Cubs starter struggled with pitch count, today it was Travis Wood.  Wood went five innings giving up three runs on six hits while walking two and striking out seven, he settled for a no decision.  Offensively the Cubs couldn’t get much strung together against Adam Wainwright.  David DeJesus blasted his 8th home run of the season as he continues to haunt the Cardinals.  Dave Sappelt had the biggest hit of the afternoon, an RBI single in the sixth inning to put the Cubs up 4-3, he finished 1-for-3 with a walk.  The rubber game of the series will be tomorrow afternoon, which is also Kerry Wood appreciation day.