Cold weather usually favors the pitchers, while it was cold, I think both guys didn’t need any help today.  Jeff Samardzija and A.J. Burnett had themselves a nice tidy pitching duel today in the opener with Samardzija 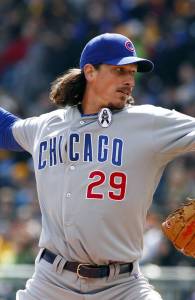 getting the better of the tattooed righty while spinning a masterpiece.  The Cubs jumped out in front early on a loud, and long home run from Anthony Rizzo, and that was all the Cubs needed as Shark shut the door the whole day.  The Cubs had to endure the customary Marmol implosion in the ninth inning, but Sveum showed a quick hook in getting Marmol out-of-the-way so Russell and Fujikawa could finish off the victory.

At The Plate – The Cubs only managed six hits on the day, but they were productive.  Starlin Castro was 2-for-4 with two singles, a stolen base, and one run scored.  As I mentioned, Anthony Rizzo had the big blow, Rizzo ended the day 1-for-4 with that massive two-run homer in the first.  Nate Schierholtz enjoyed a solid Cubs debut as he was 1-for-2 with a walk and a run scored.  Welington Castillo rounded out the offense today going 2-for-4 with two opposite field doubles, and an RBI.

On The Mound – It was the Jeff Samardzija show from start to almost finish.  Shark went eight dominant innings giving up no runs on two hits while walking one and striking out nine Pirates.  He turned things over to Marmol in the ninth, and things got sketchy.  Marmol was only able to retire one hitter in the ninth, he hit McCutchen and gave up one hit, and a run as well.  James Russell took over and retired the only hitter he faced, then the new Cubs import Kyuji Fujikawa retired the only man he faced, on two pitches, two earn his first Major League save.

Up Next – The Cubs have tomorrow off, which is the worst after a winning opening day, now we have to wait till Wednesday to watch them play again.  That is when Edwin Jackson will make his Cubs debut against Wandy Rodriguez at 6:05 PM CST. 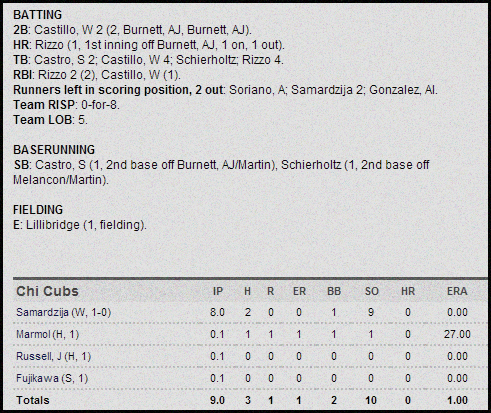 This might change within a day or so, pending a Darwin Barney to the DL move that may still happen.  This is the squad that will open the season in Pittsburgh on Monday. 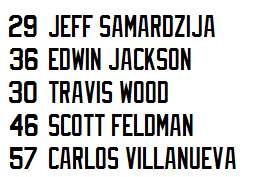 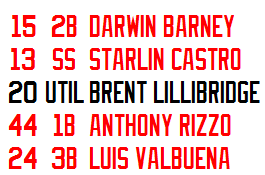 Just when you thought spring training was over, and you no longer needed to worry about injuries before the regular season…BOOM!

In a game that meant nothing against the Astros Darwin Barney made a diving attempt at a meaningless foul ball, and did his best Bill Mueller impersonation and slid into a meaningless wall, and sliced open his knee.  It was bad enough to require five stitches and is now out of the Cubs opening day lineup and depending on a doctor’s visit today, could be out even longer and require a DL visit.  Barney’s absence isn’t a huge hit to the lineup, but it is a ginormous hit to the defensive aspect of the Cubs game, as the defending gold glover will have to wait awhile to begin his defense (get it?), seems rather ridiculous that he was hurt when he probably shouldn’t have been playing, but hindsight is 20/20 I guess.  Well, that was worth it, eh Dale?  Brent Lillibridge will now get the start at second base on Monday in Pittsburgh, and will be in the same starting infield as Luis Valbuena.. sigh, here we go!

Spring training is a time to evaluate talent, see which players may have taken a step forward or backward, and to see what some of your young prospects can do against some major league talent.  The other thing the Spring is known for is injuries, and the number one thing that teams want to come out of spring with is health.  The Cubs are not doing that.  The troubling news

coming out of camp today is that both Scott Baker and Ian Stewart will both start the season on the DL, that’s not so great, and I haven’t even approached the Matt Garza situation yet.  We’ll start with Baker, and the news is not good.  Baker, who is coming of Tommy John Surgery felt some discomfort in his elbow after his spring debut this weekend, this could be considered normal, but the Cubs wanted an MRI.  Baker got an MRI and has now been shut down indefinitely as there is some inflammation and fluid build up in the elbow, so you can throw that mid-April return date out the window.  Now on to Ian Stewart, he can’t run, like at all, he can’t do it.  You need to be able to run in baseball, I mean, usually you do, and right now Stewart can’t do it because of a quad injury.  So what does this mean?  Well, the Cubs were prepared to start 2013 without Baker, so they will make do somehow with their increased starting depth, Samardzija, Garza (healthy?), Jackson, Wood, Feldman could be your rotation heading into opening day.  As far as third base goes it looks like Brent Lillibridge is now a lock to make the team, and he will back up starting third baseman Luis Valbuena, gently weep if you feel the need to.  Here are some quotes today that Brett had up on his site at Bleacher Nation…

“Cubs pitcher Scott Baker had a setback, and his throwing program has been suspended indefinitely. Baker felt some discomfort in his right elbow after his first Cactus League start on [Sunday] and underwent an MRI on Monday. The results of the test were not released, and Baker was to be examined by team orthopedic specialist Dr. Stephen Gryzlo this weekend. There’s no timetable for Baker’s return and the extent of the injury is not known.”

Stewart said “it doesn’t feel like” it’s been healing, despite the prolonged rest this spring. Stewart will meet with manager Dale Sveum and the training staff this morning to assess his status.

“I know what it’s like to play through pain,” Stewart said. “That’s what’s hard about this. I can’t get through that pain and play with it. It’s just too much.”

Edwin Jackson will make the start today for the Cubs against the Padres and look to get stretched out a little bit more as we are now just two weeks away from opening day.  Here is how the Cubs will line up today, and be still my heart, Soler hitting three and Baez hitting four…. ah, the future looks bright.

He’s exciting, he won’t be at Wrigley on opening day, this year, but it’s hard not to get excited about Javier Baez and what he is doing this Spring.  I’ve seen the kid play in person, and video doesn’t do this kid justice, he’s exciting, he’s confident, and above all else he is a ballplayer.  I really like seeing fan videos, something about a different angle, the crowds reaction, the sound of the ball off the bat, makes you feel like you are there, so enjoy.

Here’s a link to the MLB.com video of both home runs

Thanks for reading, and watching,
– George

Well let’s see what Javier Baez has in store for us today.  The Cubs are in split squad action today, today’s televised game starts at 3:05 PM CST on WGN, and here is how the Cubs will line up.  Speaking of Baez, he and Jorge Soler have been optioned to their minor league teams.  Now games there don’t start for a while either so Baez and Soler might still see some at bats here in camp.  Soler was optioned to single A Daytona and it is expected Baez will join him there shortly.  I must say, Baez and Rizzo hitting back to back in the lineup has me all warm and tingly inside.

Scott Baker will get the start.

This is why the internet is awesome, I’m not in Arizona to see the Cubs top prospects play.  So I didn’t get to see Javier Baez destroy a walk-off homer against Team Japan today, but thanks to the interwebs here it is!  Enjoy!

One day after finding out that Junior Lake will be sidelined 4-6 weeks with a broken rib, Albert Almora took to twitter to reveal that he has broken his hamate bone, crap.  Obviously this is not good as the best place for top Cubs prospects in on the field, not off of it in a trainers room.

We should be getting more info on this obviously as this is a rather big blow to a top three prospect in the Cubs organization.  This is a common injury for baseball players, and sometimes it does require surgery to remove the broken piece of bone.  Recovery time varies, but somewhere between 2-5 weeks sounds right.  The one thing that it does do however, is limit the players power upon return to the game, but again, every player and situation is different.  I’m not going to speculate any further, and will wait official word from the Cubs on this news, and hopefully short recovery period.

(UPDATE)  Cubs beat writers have the story now, so there are few more details.  Almora broke the bone on a swing, and can resume baseball activities in 3-4 weeks, putting his return to the field somewhere near late May.  Really wanted to see him right out of the gate this year as it’s it first full pro year.

(UPDATE #2) Almora tweeted out yesterday that he had successful surgery to remove the bone (you don’t need it anyway) and will look to get back into games somewhere between 4-8 weeks, odds are it will be closer and maybe longer to the 8 week projection.

Chris Rusin was outstanding Thursday afternoon, which is nothing new this Spring as he has been nothing short of brilliant.  The lefty is slated to start the 2013 season in the Iowa rotation, and if he has continued success like this don’t be surprised if he is back at Wrigley sooner than later, either starting or coming out of the pen.

Brent Lillibridge made a triumphant return to the lineup going 2-for-3 with a double and two runs scored.  Welington Castillo got the start behind the plate and was 1-for-2 with a triple, two RBI’s and a run scored.  Luis Valbuena (1), Brian Bogusevic (2), Dave Sappelt (1), and Darnell McDonald (1) had the rest of the runs knocked in.

As I mentioned, Chris Rusin was awesome.  Rusin tossed five nearly perfect innings, giving up no runs on one hit while walking one, and striking out one.  Raley improved to 2-0 on the Spring with a 0.69 ERA, he has worked thirteen innings this spring and has given up one run.  Drew Carpenter, Jaye Chapman, and Blake Parker all had scoreless appearances in the victory.